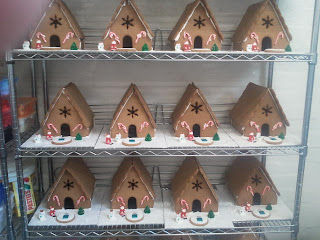 ‘Twas the night before Bakesmas, when all through the house,
Not a baker was stirring, not even a chocolate mouse.
The cookies were cut by the baker with care,
In hopes that St Bakesmas soon would be there.
The little bakers were nestled all snug in their beds,
While visions of new Kitchen Aids danced in their heads.
And mamma in her ‘kerchief, and I in my cap,
Had just settled our (tired from piping) hands for a long winter’s nap.
When out in the oven there arose such a clatter,
I sprang from the bench to see what was the matter,
Away to the oven door I flew like a flash,
Tore open the door and prayed I wouldn’t see ash.
The moon on the breast of the now-fallen cake
Gave the lustre of mid-day to objects burnt below.
When, what to my wondering eyes should appear,
But a miniature gingerbread sleigh and eight iced reindeer.
With a flour-covered driver, so lively and quick,
I knew in a moment it must be St Bake.
More rapid than risen souffle his coursers they came,
And he rolled out and kneaded and called them by name!
“Now Mixer! now Masher! Now Wilton and Fondant!
On, Silpat! On, Lustre, on, on Scraper and Agbay!
To the top of the Bowl! to the top of the scales!
Now pipe away! Pipe away! Pipe away all!
As dried gumpaste leaves that before the cake wreck fly,
When they meet with a baking fail, mount to the sky,
So up to the gingerbread house-top coursers they flew,
With the sleigh full of cookie cutters, and St Bakesmas too.
And then, in a sprinkling of cachous, I heard on the roof,
The stirring and folding of each little hoof,
As I drew in my head, and was turning around,
Down the oven St Bakesmas came with a bound.
He was dressed all in edible fur, from his head to his foot,
And his clothes were all dusted with sugar and soot.
A bundle of cake toys he had flung on his back,
And he looked like a baker, just opening his flour sack.
His eyes – how they twinkled! His dimples how merry!
His cheeks were like five petal roses, his nose like a gumpaste cherry!
His droll little mouth was drawn up like a fondant bow,
And the beard of his chin was as Americolor White as the snow!
The stump of a bubble tea straw he held tight in his teeth,
And the edible glitter encircled his head like a wreath.
He had a broad face and too much cake in his belly,
That shook when he laughed, like a bowl full of jelly!
All that cake made him chubby and plump, a right jolly old elf,
And I laughed when I saw him, in spite of myself!
A wink of his eye and a twist of his piping bag,
Soon gave me to know I had nothing to dread.
He spoke not a word, but went straight to his bench,
And filled all the macarons, then turned with a jerk.
And laying his finger aside of his nose,
And giving a nod, back up the oven he rose!
He sprang to his sleigh, to his team gave a whistle,
And away they all flew like the money I spend on ingredients.
But I heard him exlaim, ‘ere he drove out of sight,
“Happy Bakesmas to all, and to all a good night!”

Happy Holidays! Thank you for reading the Business of Baking this year, your support has meant so much to me. My little idea for a blog has now become something I’m very proud of as you all tell me how much it has become a part of your weekly reading. I’m looking forward to a 2014 filled with more blogging, more sharing, more inspiring, more interviewing… and…getting to meet some of you in person! (Woo hoo! Keep your eyes peeled for an announcment in a few weeks.)

Please – take the time over the next few days to not think about baking for a while. Unless it’s baking something for family and friends who love you and appreciate you, and you get to eat a piece or three as well. We ALL deserve a little bit of love and cake this holiday season.

Liked this? Don't miss out! Sign up to receive little business treats in your inbox.

One thought on “Twas The Night Before Bakesmas”

The following podcasts have featured me as a guest. To listen to the interview click on the link.